You Need the Water, so Do the Online Driver! 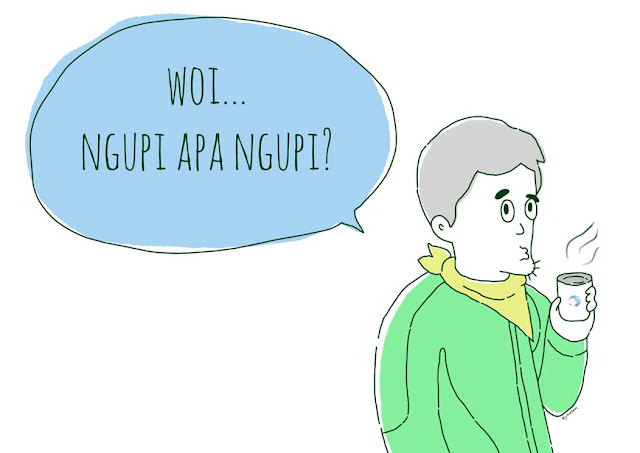 "Drinking water is only Rp 3000, Sir. Compared to the treatment, it is certainly more expensive. I can't afford, "said Iyan, an online drive.


The twilight slowly came. The lights in the lush building of the Rasuna Said cycle began to light up. The streets look deserted. There were only two or three vehicles passed. I, who just got off the 32-storey building, had to wait about 45 minutes before getting the driver; my transportation application was spinning not as fast as usual.

“Alright, Sir. I have to turn around,” said the driver.

The distant turning made me wait even longer. After ordering twice, only this time I got a response. This situation happened without reason. Firstly, the time was not right because of Sunday. Of course, Rasuna Said Street would not be as busy as a working day. As a result, the online driver in the area was reduced.

Secondly, it is me who insisted on using the cheapest promos offered by the application so that some drivers might not take my order. Understandably, the distance from Rasuna Said to Tomang is not close. Thirdly, the price is often a problem. Thank God, Iyan saved me.

How many liters of water we drink every day? 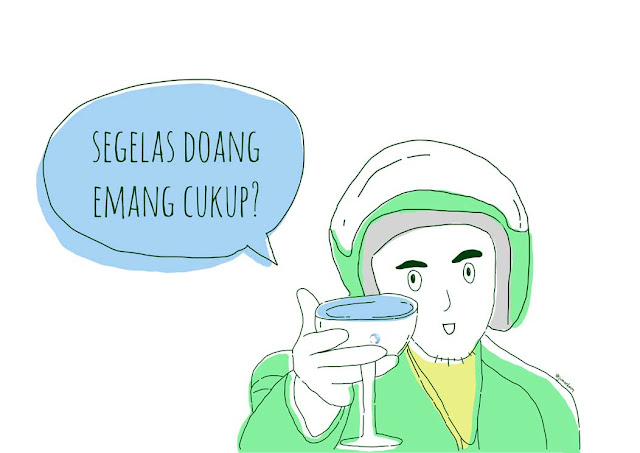 Iyan stopped a few steps from where I was standing. He reached his cell phone, while occasionally looking left and forward. I came to him, grabbed the helmet, and jumped into the back saddle.

Unfortunately, he didn't walk right away. He grabbed a bottle of mineral water, gulped it, then turned half his body, "Are you ready, sir?"

We entered Prof. Dr. Satrio Street. Faintly, the sound of the call to prayer echoed. The weather in the area seems modest. That day, the sun was not too hot.

Data from the Indonesia Meteorology, Climatology, and Geophysics Agency (BMKG) shows that the lowest air temperature in DKI Jakarta from July to October 2018 is 25 degrees Celsius, while the highest temperature reaches 32 degrees Celsius.

"On a motorcycle, I bring 5 big bottles for daily drinking, Sir," said the man who had worked as an online driver for 3 years.

He must be on the streets every day from 6am to 9pm. At 12am, this 36-year-old man will take an hour to eat and rest.

"I bought it per cardboard, so it's more economical than per bottle."

This reminded me of two other drivers. Husein, 47 y.o from Fakfak, West Papua. Although he had a nutritional education background, this man admitted that he only drank 2 bottles of 600 ml mineral water while driving.

"Oh, but every morning before going out at 6, I have drunk three glasses of water, Bang."

Another was Ariyanto, the driver who drove me from Blok M to Kemang a few days ago only drank one bottle of 600 ml mineral water during the day. For reasons of savings, he claimed he would only increase the consumption of drinking water when at home.

"You don't have to buy it whether you are at home, Sir. My wife boils water."

According to the Indonesia Food and Drug Supervisory Agency (BPOM), drinking water is safe for consumption, including natural mineral water and packaged, carbonated or vice versa. The need for drinking water is also determined by various factors. Dr. Diana Sunardi, a medical nutrition specialist from RSUP Cipto Mangunkusumo (RSCM), explained that there are at least 5 factors, namely the temperature and humidity of the environment; activity; gender and age; health condition of the body; and food consumed.

Adult men need 2 liters of water per day, while women need 1.6 liters per day. Those who work with light capacity should consume 2.2 - 3.5 liters, equivalent to 8-14 glasses. While to those with the mild working capacity is being advised to drink 14-25 glasses of water which equal to 3.6-6.3 liters per day.

Why drinking water is important? 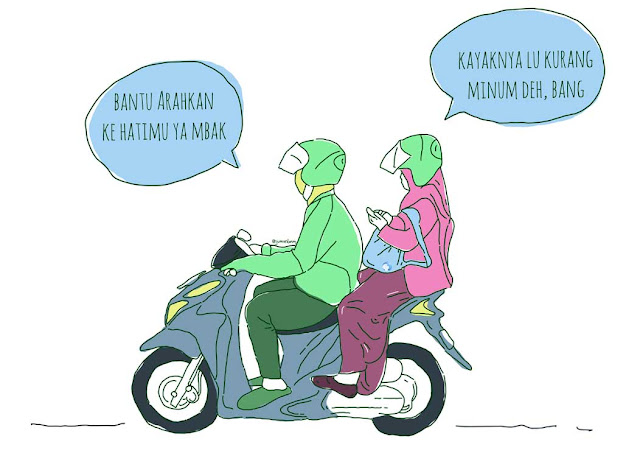 Along the way in the Bendungan Hilir area, he told a lot about water. It was stated that more than a year later he had been diligently drinking water and avoiding coffee or energy drinks.

This knowledge, it was said, was obtained from a surgeon who had been his customer.

"He said that if you drink less, you could make kidney disease, Sir."

One certain effect of under-drinking is dehydration. This is a condition where more water comes out of the body than water that enters the body. Without realizing it, the water will come out through urination, defecation, sweat, and air while breathing. 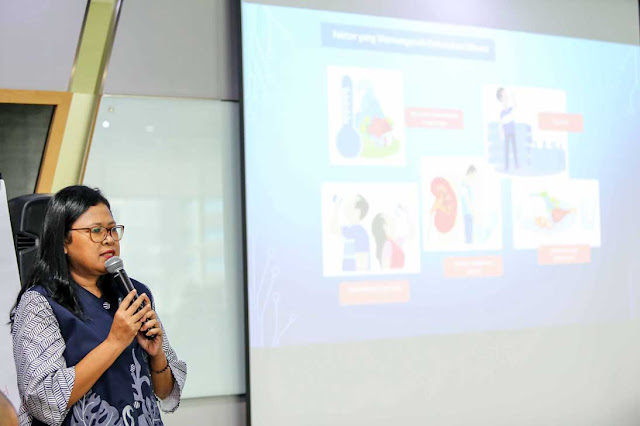 The long-term, according to Dr. Diana, will infect the urinary tract, cause kidney stones and various other health problems. This situation is not without reason, 70% of the human body consists of water. The existence of sufficient fluids in the body will provide various benefits.

Some of them are as follows:
1. Adjust body temperature
2. Moisturizes and moistens mulch (mouth, eyes, and nose)
3. Lubricate Joints
4. Protect organs and tissues in the body
5. Prevent constipation
6. Dissolve nutrients and bring them to various parts of the body
7. Bringing oxygen and nutrients to various tissues of the body
8. Metabolic waste

When is the right time to drink water? 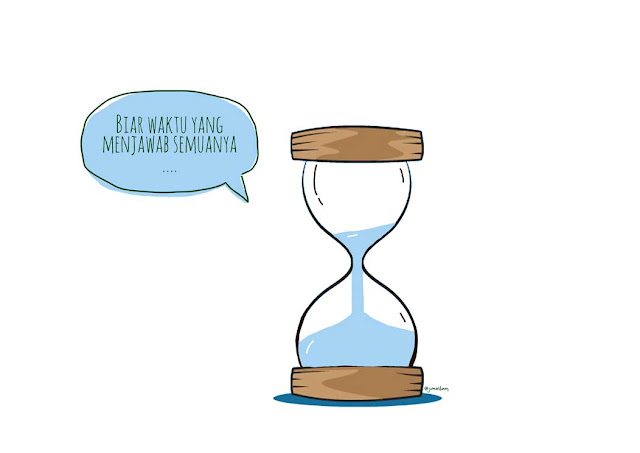 "Whether I am thirsty or not, I'm still drinking," he responded when I asked Iyan's drinking time.

It's no secret that the right time to drink water is when someone feels thirsty. Not only when you are thirsty, but also you should drink water for 30-60 minutes. It is especially in conditions of sweating. For students, before, temporarily, and after study are also required to drink.

What expressed by Iyan on our journey through the Indonesian Legislative Assembly (DPR RI) Building in Senayan made me dumbfounded. In traffic that is not so dense, my mind was even filled with the amount of fluid intake that entered the body every day.

As an office worker who sits from 9am to 6pm every day, I feel inferior to Iyan. If it's counted, I only spend 4 glasses of water in that time frame; the rest is coffee, which unfortunately does not include a type of drinking water by BPOM.

What kind of water that is suitable for consumption? 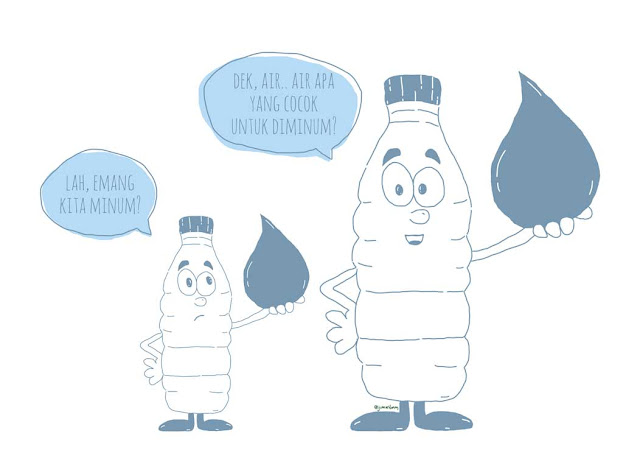 The existence of coffee as one of the most consumed drinks every day is horrifying. On the one hand it benefits the coffee industry, on the other hand, it is not suitable to be used as a substitute for drinking water.

"On average, Sir, my friends are hanging out drinking coffee," Iyan paused at the intersection of the Slipi Petamburan red light.

Besides coffee, other drinks that are often consumed are energy drinks. Hussein admitted this, the driver who took me to the office once. Not a few of the driver's friends took a break while drinking drinks, which he said, provided additional energy. 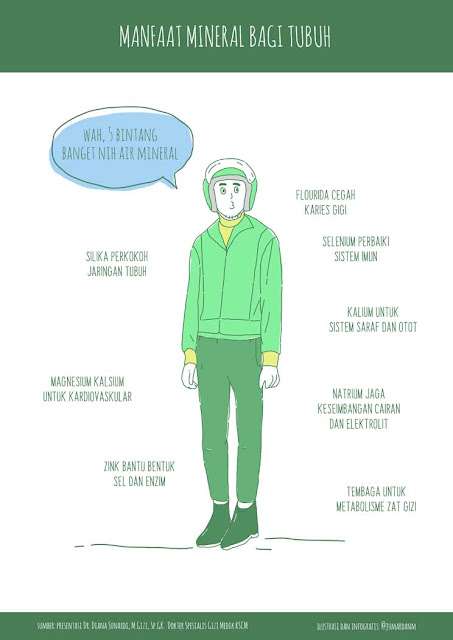 Unfortunately, Dr. Diana denied this. According to her, a doctor graduating from the University of Indonesia, water that is suitable for daily consumption are mineral water.

This is caused by the mineral content in water that is not possessed by other types of fluids. Mineral water contains minerals, such as calcium, phosphorus, potassium, magnesium, sulfur, sodium, and chloride.

There are various kinds of mineral benefits needed by the body, which include:
1. Maintaining the pH balance of body fluids
2. Helps the process of transporting nutritional components between cells
3. Maintain the work of the Sarah network
4. Helps contraction and relaxation of muscle tissue

Drinking mineral water, in my opinion, is like a saying: once rowing two, three islands are exceeded.
Our throats are free of thirst; our body needs are met.

Finally, my trip with Iyan and memories of the online driver and their drinking water had to be ended. Because, I have arrived at Tomang red light and the distance from my residence is no longer far away.
"My wife has been sick for almost a week, Sir. Fever and flu, typically like that."

"Oh huh?" my responded ear closer. The wind that blows when driving often brings away the voices of the other person.

"Yes, but I try to keep drinking water. "It's getting better," he concluded.

Iyan seemed to be well aware of the importance of drinking water. Several times he mentioned the price of a bottle of mineral water which was much cheaper compared to treatment due to lack of fluids.

This seems to make me like getting a raw punch right in the pit of the stomach.